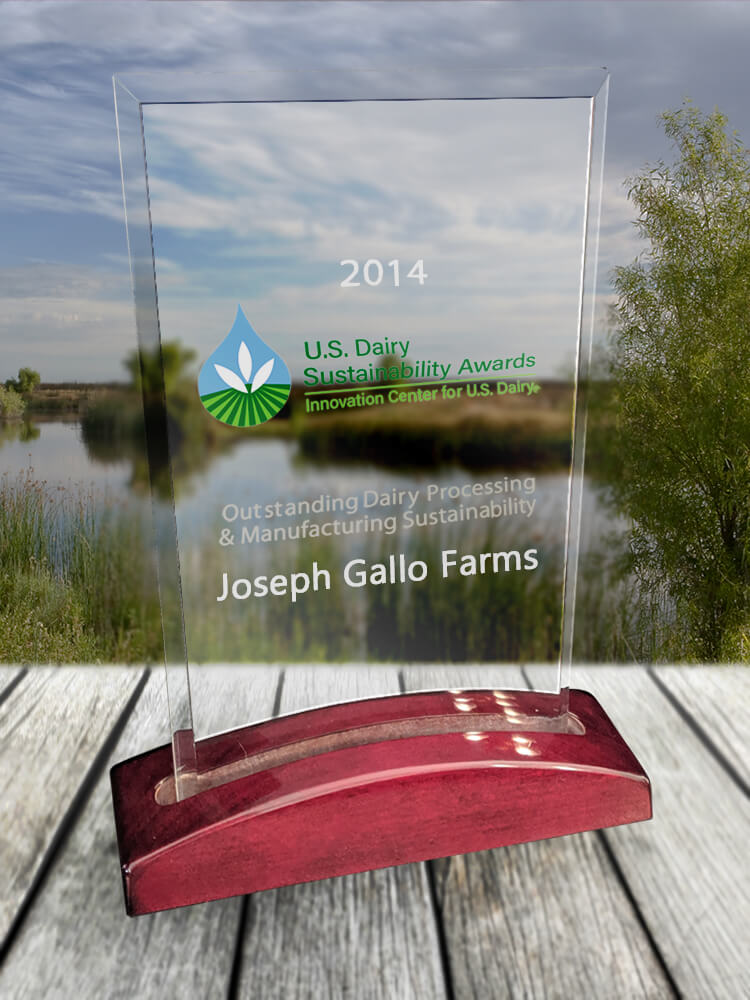 On May 14th, 2014 the 3rd Annual U.S. Dairy Sustainability Awards were presented at a special ceremony in Washington, D.C. with Joseph Gallo Farms, maker of Joseph Farms® Cheese, receiving an award for Outstanding Dairy Processing and Manufacturing Sustainability.

Out of more than 40 nominees Joseph Gallo Farms/Joseph Farms Cheese was selected based on results measured by economic, environmental, and community impact, known as triple-bottom-line success. The independent panel of judges included experts from academic institutions, government, dairy science organizations, nongovernmental organizations and media, as well as environmental and dairy industry leaders.

The U.S. Dairy Sustainability Commitment and the Sustainability Awards program are supported by such sponsors as the Center for Advanced Energy Studies, the U.S. Environmental Protection Agency, World Wildlife Fund and Dolphin WaterCare. For a full list of sponsors and more information about the Innovation Center for U.S. Dairy visit http://www.usdairy.com. Download the Award Recipient PDF here.

The award cited our use of energy-efficient equipment and cutting-edge technology in our Joseph Farms Cheese Plant and innovative processes to conserve energy. Furthermore, water conservation measures reuse up to 2.9 billion gallons of water each year. Joseph Gallo Farms also takes in up to 10 million gallons of storm water and wastewater each day from local communities to reuse for irrigation. They also assessed the potential for adoption by others, demonstrated learning, innovation, improvement and scalability to further the economic, environmental and social sustainability of the dairy industry. Find out more.

2012 – Joseph Gallo Farms was a recipient of the 2012 Governor’s Environmental and Economic Leadership Award (GEELA), which is California’s highest environmental honor. All nominations undergo an extensive screening, review and evaluation process. The program recognizes individuals, organizations, and businesses that have demonstrated exceptional leadership and made notable, voluntary contributions in conserving California’s precious resources, protecting and enhancing our environment, building public-private partnerships and strengthening the state’s economy.

The Waste Reduction Awards Program (WRAP) was administered by CalRecycle (formerly the California Integrated Waste Management Board) from 1993-2011. WRAP evaluated the waste reduction, procurement, and education activities in the internal business practices of the applicant, not its services or products.

Innovative Farmer of the Year

2004 – In June 2004, Michael D. Gallo was the runner up of the 2004 National Wetlands Conservation Awards, presented by the United States Fish and Wildlife Service.  Mr. Gallo was presented with this award for developing a unique agricultural conservation easement affecting 2130 acres, featuring wildlife compatible crops, as well as enhancing riparian habitats.  The restored systems are providing critical habitat for several thousand arctic nesting geese and other local migratory bird species.

2001 – In November 2001, Joseph Gallo Farms received a prestigious environmental award presented by the United States Environmental Protection Agency “in recognition of its outstanding leadership in protecting the environment and public health for this and future generations.”

2000 – In November 2000, Joseph Gallo Farms was presented with a Certificate of Recognition in The 2000 Governor’s Environmental and Economic Leadership Awards “in recognition of meritorious contributions to environmental protection and resource conservation in the State of California.”

1996 – Joseph Gallo Farms was presented with an environmental award by the Central Valley Joint Habitat for providing over 2000 acres of land for a perpetual conservation easement, dedicating 1500 acres to the production of wildlife-friendly crops and restoring 102 acres to wetlands.

In 2011 Mike Gallo received the Chancellor’s Medal from UC Merced. This award is the highest honor bestowed by a UC campus. It recognizes individuals or organizations whose contributions have been significant in advancing the goals of the university.

INNOVATIVE FARMER OF THE YEAR

WOMAN OF THE YEAR

EXCELLENCE IN BUSINESS FOR AGRICULTURE

THE INSTITUTE FOR FAMILY BUSINESS AWARD

1997 – Merced County Board of Supervisors awarded the Certificate of Appreciation in Recognition of Outstanding Agriculture Contributions to Merced County, the Agri-Business Committee of the Greater Merced – Merced County Chambers of Commerce

1997 – Joseph Gallo Farms was honored by the Merced County Agri-Business community for having developed many of the large herd dairy management practices currently used in the dairy industry today and for pioneering the California cheese market with the first large scale production and sales of Cheddar and Monterey Jack cheeses.

1996 – Top Producer Magazine featured Mike Gallo on its December 1996 cover and labeled him a “Brand Baron” for making branded cheese international. Mike was a featured speaker at their national business conference in Denver in March 1998 on how the company turned a little known generic cheese into a best-selling brand. “Joseph Farms is presently the largest selling California produced retail brand cheese in the United States and has been sold in over 20 states and in Mexico, the South Pacific, Guam, the Caribbean, and Japan.”

1995 – Joseph Gallo Dairy was named by Successful Farming magazine as “The Nation’s Largest Dairy… It is still believed to be the largest family-owned and operated dairy in the United States.”